I remember my first time like it was yesterday. It was late March in the winter of 2016. My wife and I were looking for some après-ski nourishment. After a long day of skiing at Stowe, this was an absolute necessity. Making our way down the mountain access road we eventually wandered into a restaurant called Doc Ponds.

Gazing at the beer menu while taking a seat at the bar, I asked the bartender, “what do you recommend?” An avid Vermont skier, I’m very familiar with the Green Mountain State’s vast craft beer market. However, I always like a local’s take when I can get it. Ultimately, his response pushed me in the direction of Zero Gravity Brewery Green State Lager, a beer that they had just put on tap. One sip and I was in love, hooked on the light, crisp, bready Pilsner bearing the state’s name. 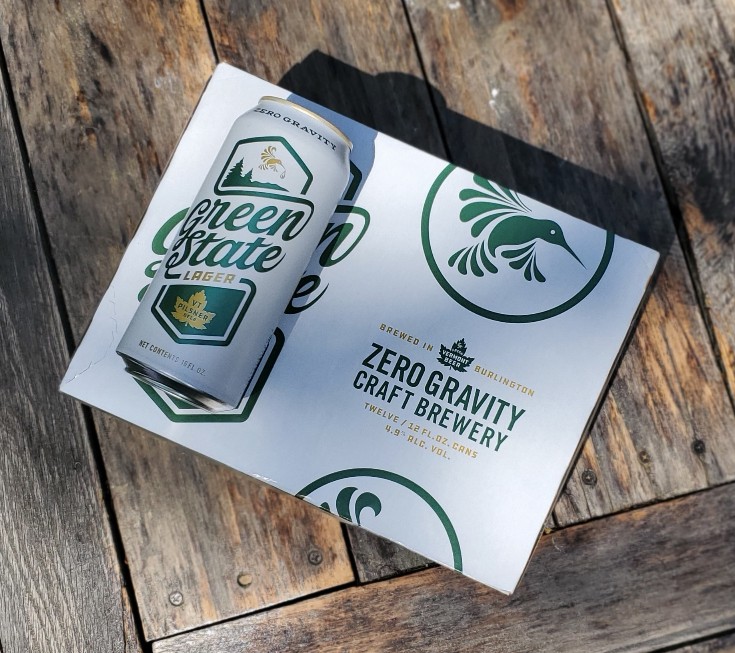 Fast forward three winters and many, many Green State Lagers later. There I sat at Mount Snow’s 1900′ Burger anxiously awaiting a beer pairing dinner with Zero Gravity Craft Brewery. In front of me lay the first course. German-inspired, this sausage dish was the ideal companion to a beautiful pour of my go-to beer.

Zero Gravity co-founder, Matt Wilson stood up from the table across the room and began to speak. “I’ve been asked to introduce what I think is…simply the best beer ever, Green State Lager.” Laughter ensued throughout the room. No one, including me, would think a little old Lager from the state of Vermont would rank right up there with the big boys of the craft beer world. But, chuckling out loud and having enjoyed countless cans of Green States since that first fortuitous sip, I got it. I knew exactly what he meant.

A New School Tribute to an Old-World Style

Green State Lager, appropriately named for the state that it’s brewed in, invites you into Vermont one refreshing sip at a time. Inspired by traditional German and Czech pilsners, this Pilsner is a new school tribute to the old-world style. “What we ended up with is probably closest to a Southern German Pils (the best example might be the Rothaus Pils), but we are using ingredients from both Czech and German origin. We use 100% German Pilsner malt (Weyermann) and the hops are Saaz and Hallertau Mittlefruh,” said Wilson. The result, he elaborated, is “Zero Gravity’s way of staking the claim that this is indeed Vermont’s Pilsner.”

A Well-Balanced Pilsner That Pairs With Any Season

Poured in a glass you’ll be taken by the sight of its beautiful golden hue topped by a pillowy head the likes of beaten egg whites. Raise the glass toward your face and the nose bursts with a sweet, floral almost herbal scent. A smell that is only surpassed by the flavor of the Pilsner itself. Following the scent, Green State coats your taste buds with a floral hoppiness that balances perfectly with the traditional bready cracker-y sweetness that you’d come to expect from a Lager.

The true beauty of Green State Lager is how well that it pairs well with any season. Day drinking in the fall months while watching football and eating wings, there is no finer compliment. Midwinter, après-ski you’ll find it is the perfect cure for sore quads and frozen feet. Warm spring days and sweltering summer months are made just a bit cooler when accompanied by a few Green States. Day drinking, night drinking, winter, summer…yes, it’s simply the best beer ever.