Graeme Hirstwood, the head brewer at Fort Collins-based McClellan’s Brewing Company, hails from Edinburgh, Scotland. His connection with and understanding of beer history and styles of the British Isles is evident, and he always seems to have an entertaining anecdote at the ready. In between telling stories about punters — slang for regulars at a pub — and explaining that a bishop’s collar is a big, foamy head on a beer, he recounted his tale of piecing together the recipe for Wulver IPA from an old ledger he unearthed in an archive in Edinburgh. Dating back to 1885, the ledger was from a Scottish brewery originally known as Thomas Usher & Son Ltd. The date of the ledger shows that this Scottish IPA recipe is a contemporary of the original English IPAs. Although Scottish IPA is not a style recognized by the Beer Judge Certification Program or the Brewers Association, Hirstwood believes it deserves consideration as a type of IPA. As he put it, it is “different shades of the same beer.” If you have ever wondered what those original, seafaring IPAs taste like, you would be hard-pressed to find a better example than Wulver IPA.

Besides being a history lesson in a glass, another reason to seek this one out is the two serving styles that McClellan’s offers. If you order a Wulver IPA, you are presented with the choice of either cask or keg. Both have their merit, but their hard to come by cask-conditioned ales are an authentic, traditional way to serve a variety of U.K. styles. Before kegging technology, all beer was conditioned and served from casks by way of gravity or hand pumps. It is a living product that has a unique flavor and mouthfeel compared to kegged beer. This is due to the secondary fermentation and natural carbonation in the cask. Hirstwood usually reaches for the cask version, but he recommends trying them side by side.

Although Wulver’s 7.7% ABV comes in slightly above the high end of the range for English IPA, it reflects the heavily hopped, high alcohol IPA of the past. Likewise, the 80 IBUs stays true to its historical IPA roots when they relied on the preservative qualities of high alcohol and hopping rates.

Hirstwood chose traditional ingredients to brew Wulver IPA including East Kent Golding and Fuggles hops, London Ale yeast and Irish Ale Malt. He also includes malted wheat as 10% of the grain bill. Although wheat and other adjuncts are commonly used in modern IPAs, malted wheat isn’t normally included in English IPA recipes. However, the use of wheat in the recipe is not only a practical way to aid in head development and retention but also inspired by the circa 1885 recipe he found in Edinburgh.

Unfiltered, unpasteurized Wulver pours slightly hazy with a surprisingly deep, amber color from both keg and cask. Both versions also have persistent, billowy, off-white heads. However, the natural carbonation of the cask version presents a creamier looking head with tighter foam. As you tuck in, you’ll notice a rich malt backbone with just enough sweetness to carry the delicate hop profile that expresses herbal, grassy and even grapefruit notes. Hirstwood described it as nuanced and punchy. He recommends pairing it with rich, hearty fare, such as mutton, Scottish crowdie cheese and ripe camembert.

A Can Can Award Winner

McClellan’s began canning Wulver IPA, a Can Can Awards Gold Medalist, along with their flagship Kilt Tilter Wee Heavy in January 2020. Due to nationwide can shortages they were forced to halt can production in March of 2020. Fortunately, they have recently been able to acquire cans and are back to canning not only those two beers but also a seasonal offering along with their smooth and aptly named Pierce Brosnan Irish Red Ale.

The Myth of the Benevolent Wulver

The name of the beer and the can art is inspired by a creature in Scottish folklore known as a Wulver. This hairy, humanoid, wolf-headed figure was fond of fishing and returned kindness to locals by leaving them part of his catch. Luke Drozd, the English artist responsible for the can art, incorporated the Wulver legend into an eye-catching design with unique color combinations and textures.

Aside from bellying up to the bar at McClellan’s, you can find cans of Wulver IPA at several fine beer retailers in Fort Collins, Colorado. If you don’t see it on the shelves, you can always request that they order some from McClellan’s. As a year-round beer, you can rely on to-go growlers, crowlers or six-packs directly from McClellan’s. Give it a try and you’ll be a punter before you know it. 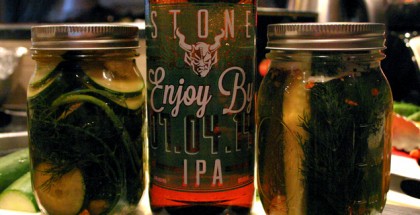