The Liquid Bake Sale is a fun and innovative initiative that has already attracted signups from 28 breweries across the state, each making a recipe of their choice. With no limits as to what each brewery can cook up, we can expect a diverse and imaginative assortment of beer-offerings with something for everyone in the mix, in true bake sale fashion. “Sometimes we feel like the PTA for breweries, but in the best way possible. Texas Craft Brewers Guild Executive Director Charles Vallhonrat says, “When the idea came up to throw a fundraiser for the Texas Craft Brewers Guild, a bake sale seemed like a natural thing to do.”

To fully replicate the bake sale experience, and further strengthen the Texan foundation of the project, all Liquid Bake Sale beers will be brewed with malted grains from Fort Worth’s TexMalt maltsters. As the flour is to baking, malt is to brewing, and the use of Texan malt in each beer binds the project together with an important local partnership. TexMalt jumped on board immediately. “Taking on the role of the malt provider for this project was a large undertaking and a great opportunity for new breweries to use our malt.  We hope brewers and consumers alike enjoy the terroir of Texas grown and malted grain!” says co-founder Austin Schumacher.

A non-profit advocacy organization, the Texas Craft Brewers Guild has been instrumental in supporting local breweries since its formation in 2009, offering educational and logistical resources, and raising the profile of craft beer in Texas. Most essentially, the TCBG has won key legislative changes that have created crucial freedoms for Texas breweries, particularly the 2013 law allowing taprooms to serve beer onsite and the 2019 legislation allowing breweries to sell beer-to-go. The Guild has also been immensely pro-active during the pandemic, running several key campaigns to galvanize support for independent breweries, including the Great Texas Beer Run, Save Texas Breweries and the launch of the Texas Brewery Explorer app (now the Texas Brewery Passport).

But with finances stretched by the COVID, the Guild needed a new initiative to bolster its revenue in order to continue its important work. “Liquid Bake Sale grew out of the need to pivot during the pandemic and come up with a creative way to bring our brewers and beer fans together to continue the mission of the Guild. This was especially important in light of having to cancel our largest annual fundraiser, the Texas Craft Brewers Festival, last year in favor of a smaller virtual event” says TCBG Deputy Director Caroline Wallace. “We decided early on that we wanted breweries to have as much freedom and creativity as possible. Since breweries wouldn’t be limited to a common recipe or style, we started thinking about concepts that embraced variety—everyone bringing something different to the table—which led us to the idea of doing a twist on the old school community bake sale.”

Texas breweries have been swift to get on board and support the initiative. Keenly aware of the importance of the Guild’s work, they have responded with vigor and enthusiasm. First off the mark were Jester King with an Imperial Babka Stout, flavored with brioche, vanilla, cacao nibs and lactose and Funky Picnic with an Apple Cobbler Golden Pastry Stout. Blue Owl’s Gramma Jeff’s Sour Peach Cobbler and Freetail’s Gravity Boots Hazy IPA came next, with Redhorn Brewing’s Peanut Butter Chocolate Stout the most recent offering. “Blue Owl Brewing is excited to support the Texas Craft Brewers Guild and showcase TexMalt for the Liquid Bake Sale” enthuses Blue Owl’s co-owner and executive brewer Jeff Young. “We are thankful for all that TCBG does for the Texas craft brewing industry and we’re giddy to try all the different variations!”

Nomadic Beerworks are equally positive about the Liquid Bake Sale, and will be releasing their brew on April 17th. “Getting involved on this project was a no brainer. Our Texas Craft Brewers Guild fosters a sense of community amongst Texas Breweries and successfully fights for brewery rights in our highly regulated state, and wins!” says Nomadic co-founder Daniel Tyranski, “We’re proudly demonstrating the complexity of flavor that a uniquely Texan beer can have, so we’ve produced a Blackberry Sage Farmhouse Ale, brewed with panhandle malts and fermented with a native yeast from Big Bend, Texas.”

Out in Red Rock, Texas, Wild Bunch Brewery is preparing a Blueberry Blonde fermented with champagne yeast to bring to the table. Co-owner and head brewer Jarle Lillemoen is looking forward to getting involved. “I think the Guild does so much good work on behalf of Texas breweries, that they deserve every dollar that gets passed their way” he says, “This was a great opportunity for us to try a new malt provider, and help out our guild at the same time.”

Looking Forward to a Great Summer

With so much enthusiasm and creativity surrounding the initiative, the Liquid Bake Sale is gathering significant momentum across the state. Breweries from locations as diverse as Corpus Christi, Magnolia, Marathon, Johnson City and Abilene are getting on board, and releases are expected to continue into the summer. The project is complemented further by cool retro-chic label art from Austin-based designer Lauren Dickens, which is also available as souvenir merch from the TCBG website. “We were so excited to work with Lauren on the Liquid Bake Sale packaging and have been thrilled with the passion and creativity she put into the project” says Caroline Wallace, “Lauren’s artwork makes the beers so fun and instantly recognizable which will help Texans to spot and seek them out.” The combination of delicious, imaginative limited-edition beers from popular Texas breweries and top-notch branding is bound to attract attention from out-of-state beer lovers too, and will hopefully inspire other guilds towards similar fundraising projects. Here in Texas, there’s a summer of exciting dessert-themed beers to look forward to! 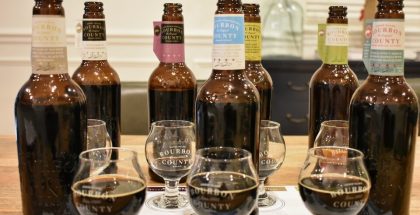 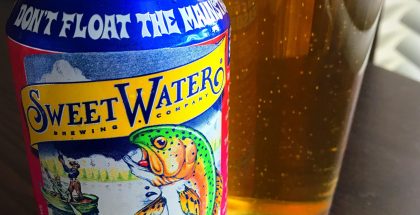