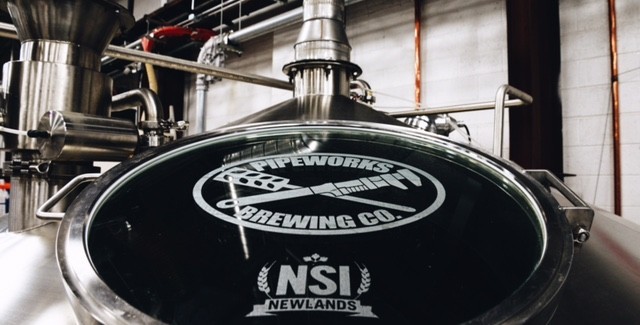 There are few beers that I actively go out and look for the day that distribution begins. One of those rare exceptions is anytime Pipeworks Brewing Co. releases a new beer from their Fish Series. If you’re not familiar with this series, it consists of big imperial IPAs with the addition of fruit and, typically, honey. They’re sweet, they’re fruity and the most recent release does not deviate.

Blueberry Cichlid is the newest member of the fish family. A series that already includes beers like Spotted Puffer, Emerald Grouper, Crimson Snapper and more, continue to show why Pipeworks is so actively sought here in Chicago.

Like the rest of the series, Cichlid is an imperial IPA brewed with fruit — in this case blueberries — and honey. If you’re looking for a blueberry beer you’ve come to the right place.

There’s something to be said for a blueberry beer that’s released when temperatures are below freezing and is still the perfect fireside companion. No, it’s not a big bold stout, but Blueberry Cichlid would be a beer that’s perfect in any weather – even on a cold winter night.

I opened this beer up on a Friday evening with every intention of going out for a friend’s birthday later that night. At 9.5% ABV and 22oz and my drinking abilities not what they use to be, let’s just say I didn’t make it out that evening. It’s not too often I’ll drink an entire bomber of beer by myself but there’s always those special exceptions and Cichlid is one of those

The beer pours a dark amber color with a hint of blue mixed in. Many of the Fish Series beers, except for Black Tuna, pour lighter in color so this is a slight change from the others. While many of them usually use lighter tropical fruit, the blueberries in Cichlid definitely accounts for the change in color.

You’re not going to be fooled by the smell. The blueberries pop on the aroma and you get that big IPA smell with the hops and the sweetness of the honey mixed in. After seeing the beer and smelling it, the only thing left to do is taste it.

I’ll admit I haven’t had a Fish Series beer I haven’t liked and the trend continues. The aroma translates into the taste and you get strong blueberry tasting notes with a little bit of honey but it’s not easily detectable. It’s slightly bitter, but not as bitter as your standard imperial IPA. If you like fruity beers you’ll love Blueberry Cichlid.