Beer lovers rejoiced last week with the announcement of Fremont Brewing’s Black Heron Project. The endeavor, a farmhouse brewing experience that is inspired by the ingredients and seasons native to the Pacific Northwest, will feature beers that (in the words of the brewers) are oak-fermented, bottle-conditioned and patient. To us, they are experimental, delicious, and wild – a complete testament to the famed brewery’s unwavering creativity and passion.

An intimate event at Fremont’s original location last Thursday was the perfect excuse to not only try three of the project’s initial offerings, but also to get the brewer’s take on their program.

“This is a debut of a project long coming for us, and required much patience,” said co-founder and owner of Fremont, Matt Lincecum. “The mixed fermentation program is something we had planned on doing since day one.”

Lincecum went on to express his gratitude of being located in the great brewing state of Washington. Locality is, undoubtedly, a pillar of the Black Heron Project – with the beers in the program being products of ingredients sourced from local farmers.

“That’s the fun of this. We have the hops, we have the barley, we have the best water, and as the fruit comes online we’ll be able to take advantage of that as well,” said Lincecum.

“This is, to me, an extension of one of my favorite parts of Fremont. This is a way for us to really connect with all the amazing producers in Washington.”

The three beers debuted at the event, the La Premiere, the Viognier Silence, and the Raspberry Silence, were a testament to the time and innovation of the Black Heron Project.

The Raspberry Silence, a golden ale refermented in oak with raspberries, was intensely jammy – and with 100 pounds of raspberries in every barrel, it’s no wonder. Brewed with skagit copeland pilsner, skagit wheat, special aromatic and dextrose malts that are paired with saaz hops, the Raspberry Silence deceptively sits at a sizeable 8% ABV.

The Viognier Silence has the malt and hop varieties of it’s sister, the Raspberry Silence, and features 125 pounds of viognier grapes from nearby Patterson Cellars in every barrel. The result of this beer’s three month refermentation in oak barrels is a sweet, velvety beer sitting at 9.4% ABV. To top off this impressive recipe, Fremont packaged the Viognier Silence by bottle conditioning with champagne yeast for roughly eight weeks.

The final brew to write home about was La Premiere – a Brett IPA. This brew, a result of a dance among citra and amarillo hops, skagit copeland, C-15, rolled oats and flaked wheat malt, and finally brettanomyces yeast is superb. The 6.2% ABV brew contained the funky and wild flavors one would hope for in a Brett.

Though these three brews kicked off the Black Heron Project with gusto, the brew team has no signs of slowing down. The plan is to grow the program over the next year by continuing to partner with local farms and businesses, and by playing with new yeast and bacteria from fruit within the state.

“It’s like having a little brewery,” said Lincoln. “It’s going to be really fun.”

For more information on the Black Heron Project, visit Fremont’s website and social pages, and snatch a brew for yourself on tap in the brewery’s Urban Beer Garden. 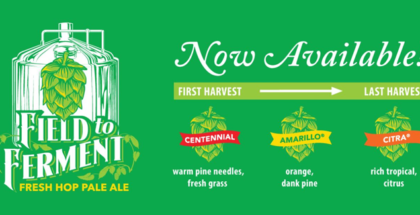