One night shortly after my mother-in-law moved to the small town of Greenfield, Indiana, I found myself itching to explore the area. I wasn’t expecting a whole lot in the way of craft beer, but I was pleasantly surprised.

I use Untappd to check-in beers—I never rate them—but never really utilized the other parts of the app. Did you know they have a section where it will show you craft breweries around you? I didn’t. Luckily that day, in Greenfield, I was tapping through the app and found that part and one little brewery popped up. That brewery was Wooden Bear Brewing. Not only was it the only brewery for a while in any direction, it was literally a mile away from my mother-in-law’s house.

(Read: Why I Stopped Rating Beer on Untappd)

Clearly I was meant to visit this brewery. Over the past few years every trip I make to Greenfield includes a stop at Wooden Bear. Typically I’ll sit at the bar, chat with whichever bartender is working, have a flight of whatever is new since I was last there and take off.

During my most recent visit, I spoke with the taproom manager. It turns out he knows Chicago beer very well too, and he told me they were releasing the last few bottles of bourbon barrel-aged Midnight Mauler the next day at 11 a.m. I had tried Midnight Mauler (non barrel-aged) before and thought it was a pretty solid beer. So the next day I prepared to go to the release and get myself a bottle. 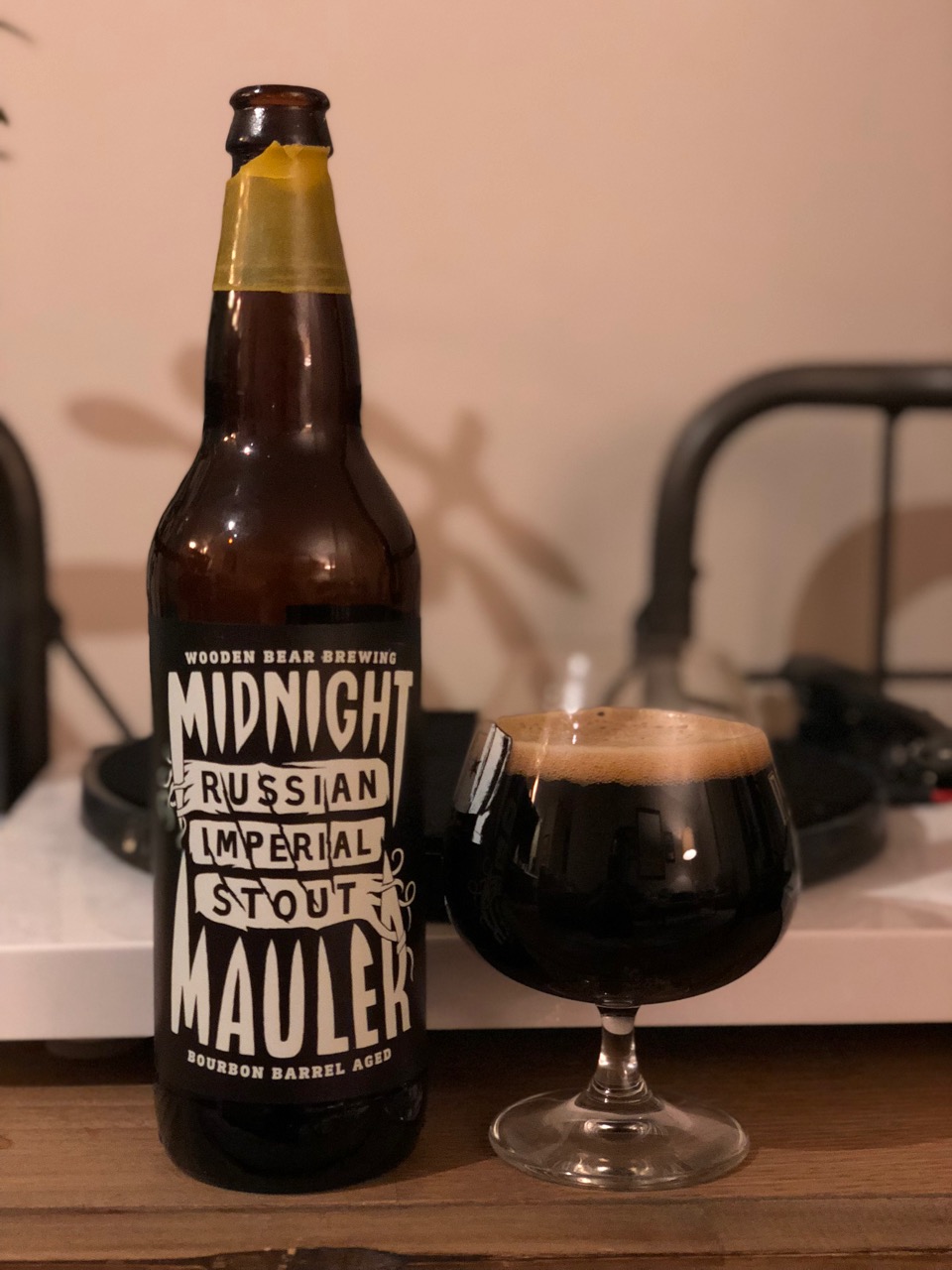 Now I’m used to Chicago bottle releases where you have to lineup hours before, wait in the cold and hopefully you’ll get the bottles you want. Things work a little bit differently in Greenfield.

I knew I wouldn’t have to lineup early, but I decided to get there right at 11am to ensure that I obtained a bottle. I walked into the brewery at 11 sharp and there were already three other people in the brewery buying beer.

When I got up to the bar I realized that all three were getting different beer. It was like no one knew about the bottle release. Imagine getting to Mikerphone on an Imperial Bean Spirit release day with a line of people waiting and they all get something different. You’d be shocked. Again different situation, I know. But still.

With the bottle sitting in my cellar for the past six weeks, it was finally time to open it up and see how Wooden Bear’s barrel program did.

Barrel-aged Midnight Mauler is a Russian imperial stout that spends a year in Four Roses barrels before being bottled and then spending a year aging in the bottle. It comes with a nice manageable ABV of 9.7%.

The beer pours a dark black with a thin head settling on top. The nose is typical of a barrel-aged stout. You get chocolate and vanilla notes with just a hint of barrel. It didn’t blow me away, it met expectations. 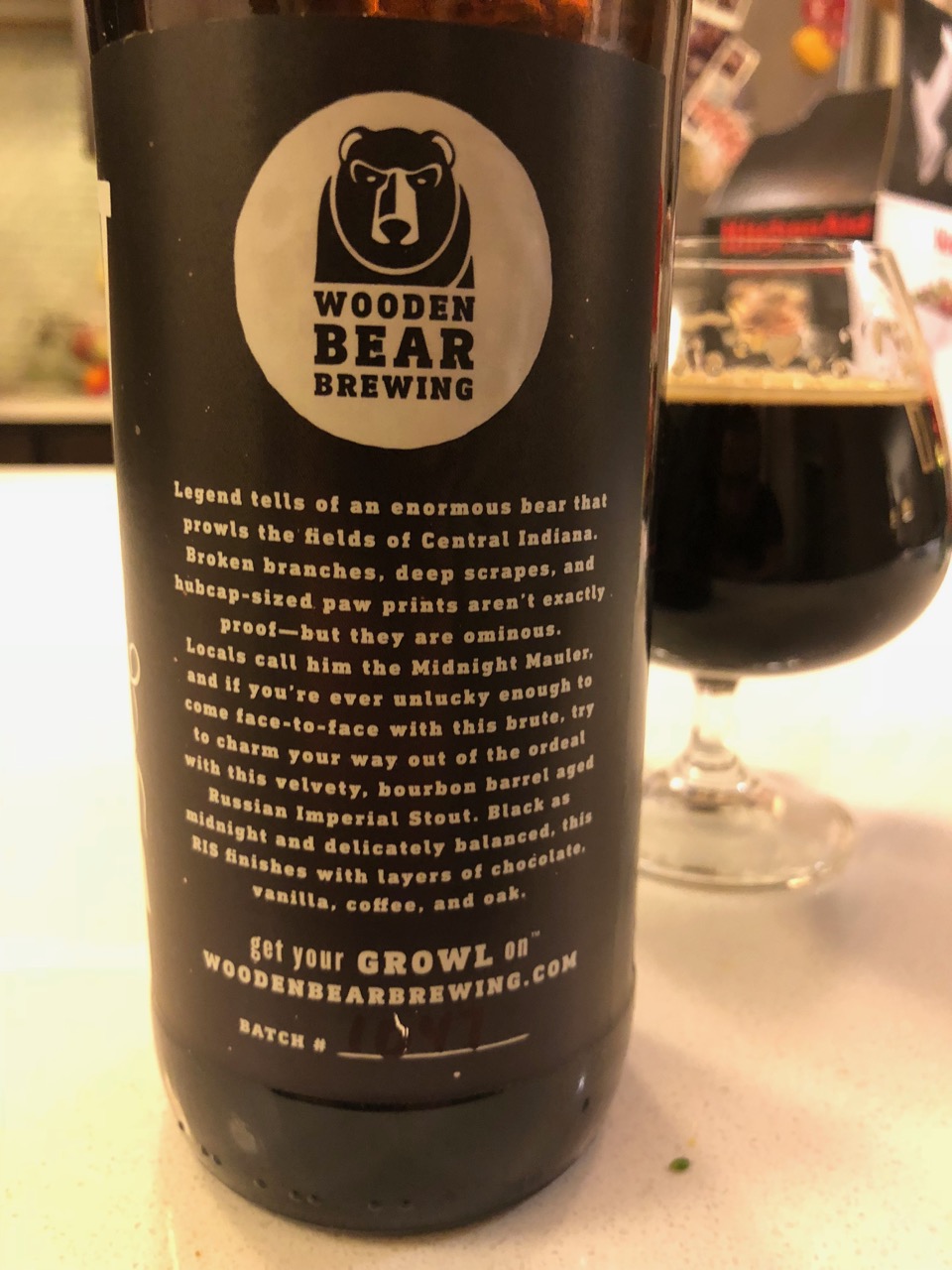 But how did it taste? Short answer—phenomenal. This beer blew away all of my expectations. They were going for notes of chocolate, vanilla, coffee and oak, and they nailed it.

In fact, the layers of flavors were so well done, the beer changed throughout the sip. Up front was clearly chocolate and coffee. As the coffee flavor faded, the chocolate stayed present but then the vanilla took over. At the end was the oak.

If I were to have one critique of the beer, it would be to have more barrel in the beer. Many breweries try to mask the bourbon and barrel qualities so they don’t have a beer that’s too hot, but this one could have been even better if just a bit more oak flavor came out. Full disclosure, this was the tail-end of the bottles they had with the initial release well before I got my bottle so maybe the barrel flavor had mellowed.

I love that I have a little craft brewery I can go to whenever I’m visiting my wife’s side of the family. If you’ve never used the brewery finder on the Untappd app, next time you’re in a new city I highly recommend you check it out. Without it who knows when I would have found Wooden Bear. 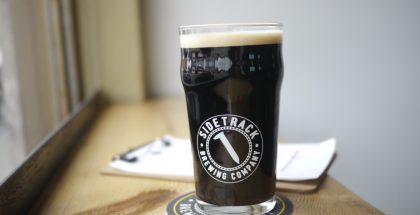