“Shipping up to Boston!” is a phrase that was uttered more times than I dared to count during my most recent trip — an overnight stay in the famed New England coastal city. It was St. Patrick’s Day weekend, and I snagged two tickets to see Dropkick Murphys perform the first night of their hometown holiday show at the House of Blues in Boston. The idea of expanding our trip to include lobster rolls, “chowdah” and amazing beer was too sweet to pass up, and drinking Lights On from Tree House helped put this trip over the top.

To make the most of our stay, we ventured up there bright and early on a Thursday. Our first planned stop was Tree House Brewing Company in Charlton, MA, about an hour outside of Boston. Since their beers are available as soon as they are packaged, there is no set schedule for what will be for sale on their can release days. It is basically a surprise just a few short hours before they open for the day. We had their Twitter account on a constant refresh to check what would be available. Luckily, when it was finally announced, we had a pretty solid lineup ahead of us. Tree House only started brewing in 2011 but quickly became a brewery whose highly sought-after beers were coveted across the country. They became a household name for their juicy, hazy New England-style IPAs. They opened up their newest location in July 2017, complete with a 50 barrel brew house, a large retail and taproom area and an outdoor pavilion on 70 acres of secluded land. Due to the hype surrounding them, you are almost guaranteed to wait in line, but, trust me, it will be worth it. The staff is super-efficient and the lines move quickly. Just be patient and soon you’ll have some amazing beer in your possession.

I was able to score some cans of Lights On. This American Pale Ale was canned the day right before my visit, March 14, 2018. It is described by the brewery as, “a modern American Pale Ale brewed to celebrate new beginnings in life and creative endeavors.” Lights On was originally brewed to celebrate the opening of Tree House, giving it this name to signify the lights officially being turned on at the brewery. 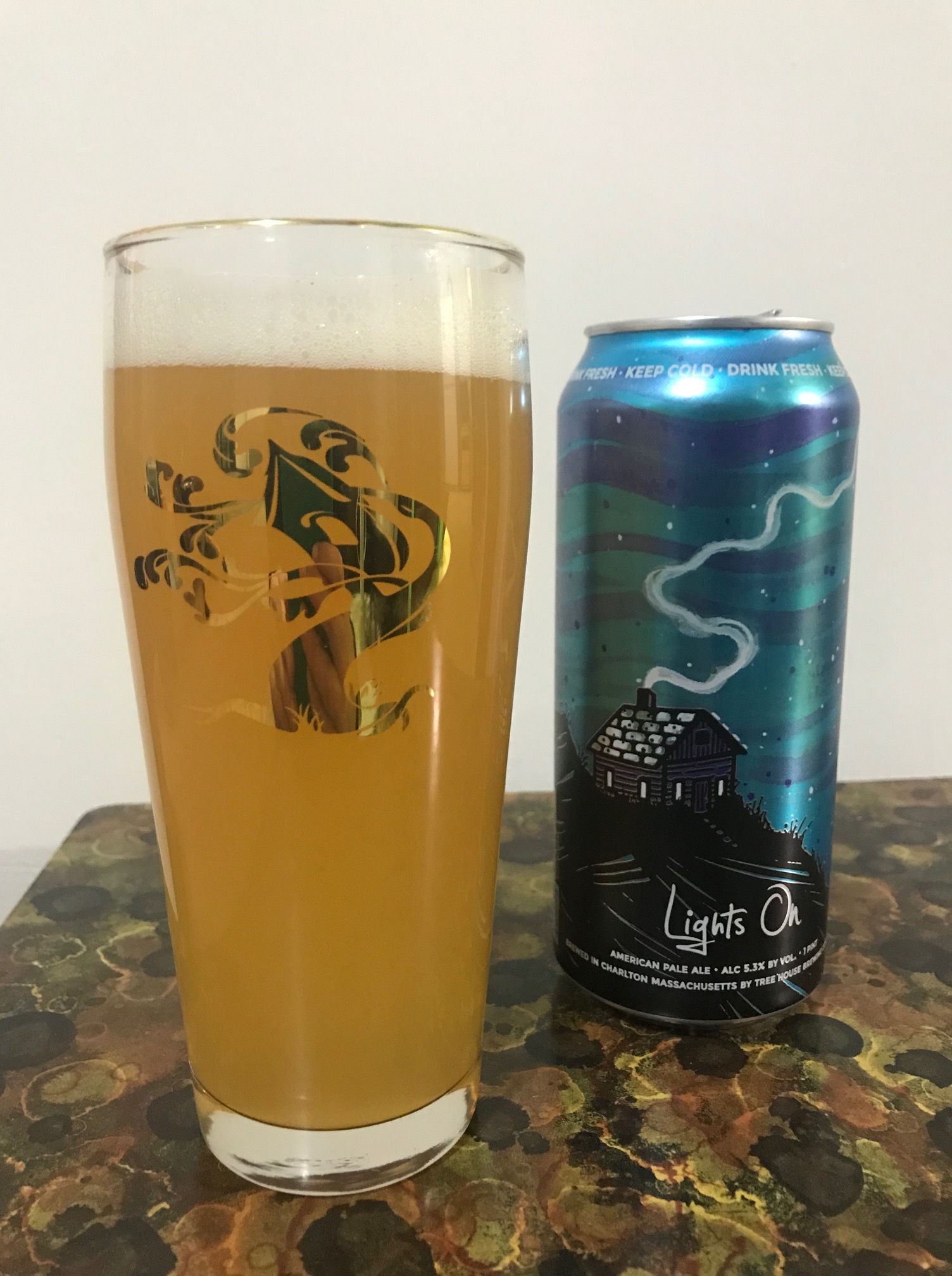 Lights On pours a hazy, orange color with a thick, solid, white head. It releases aromas of sweet, tropical fresh fruits like papayas, oranges, pineapples, guava and mangos. It tastes as good as it smells, with a heavy juice flavor and a hint of biscuity malt. Lights On has a very mild bitterness with a soft, creamy mouthfeel. It also contains a moderate level of carbonation and has a crisp, tangy citrus finish.

Overall, it is a very solid, drinkable Pale Ale. At only a 5.6% ABV, it is a good alternative to many of the boozier IPAs the brewery produces. It’s a beer that you could enjoy drinking all day. Lights On combines so many aspects that are synonymous with Tree House’s other beers, it is really a delight to drink!

To check out this beer, you will need to make the trek to Massachusetts. Currently, they do not distribute so the brewery is the only place you can score a can.