While a little different than in years past, the media virtually convened over Zoom Wednesday night to open up the seven different beers that makeup Goose Island’s Bourbon County Stout lineup.

Joined by Goose Island President Todd Ahsmann, Brewmaster Keith Gabbett, R&D Manager Mike Siegel and Senior Brand Manager Mike Smith, the bottles of Bourbon County were opened up to people outside of the brewery for the first time. 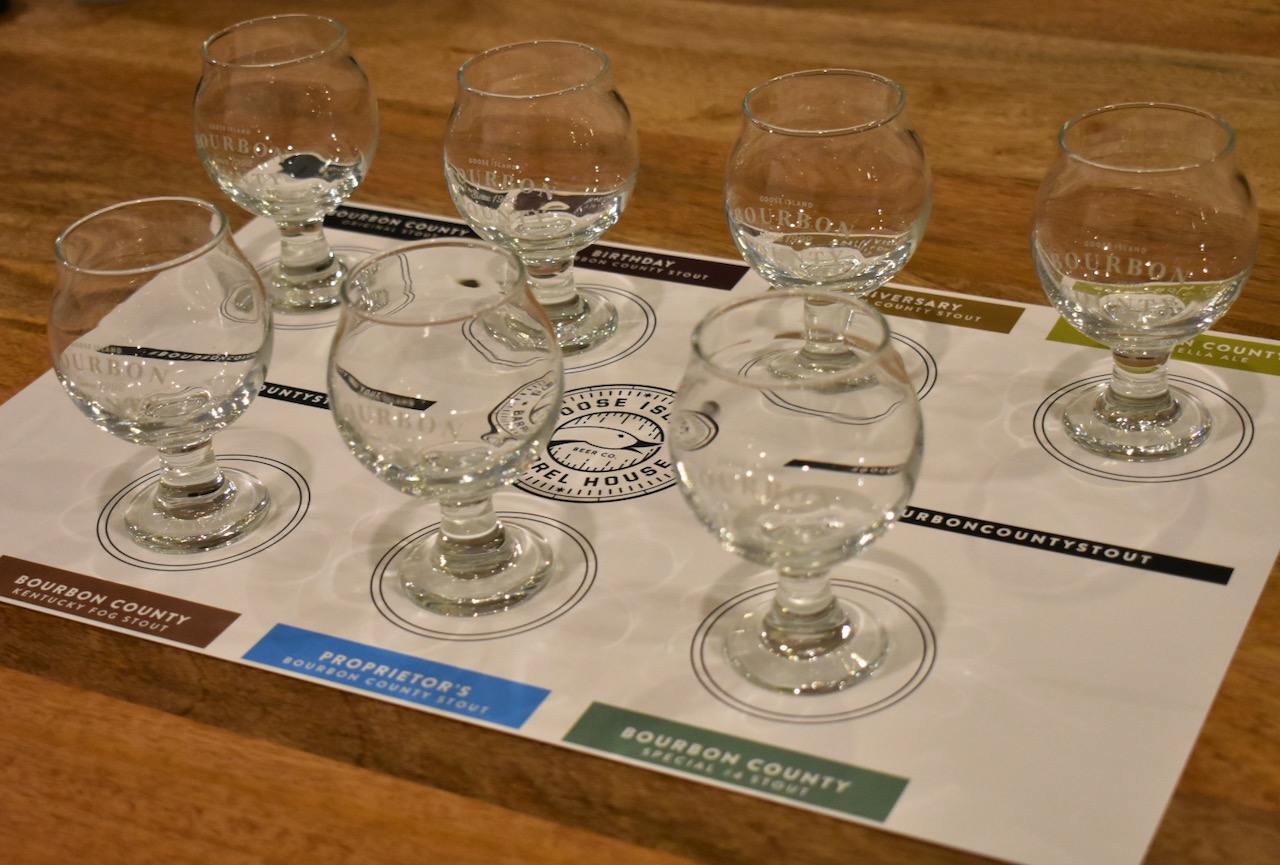 For me, this year’s lineup of Bourbon County is one of the most complete we’ve seen from the brewery in a long time. There were four standout variants, but even the three that wouldn’t fall into that category were well-made and nailed the flavor profile that Goose was hoping to achieve. As with any review, it’s going to be subjective based on preference, and while there have been variants in the past that greatly missed the mark for me, I didn’t come across anything that drastic in the 2020 lineup.

Here are my thoughts on the lineup ranked in preference of each variant. Even though I’m ranking them, really any of the first four beers could be in any order and you’d hear no argument from me.

As a bourbon fan, I was excited to try the Original Bourbon County aged in Old Forester’s Birthday Bourbon barrels. This year it’s interesting to see the power of the barrel because Birthday, Anniversary and Original are all the exact same beer — the barrel is the only thing that changes.

I’ll get to Original shortly (spoiler alert it’s excellent), but why I decided to put Birthday at the top of my list is because of the remarkable flavors the Original Bourbon County picked up from these specific bourbon barrels.

It’s more bourbon-forward than Original but still maintains a nice sweetness to balance everything out. The beer will of course have notes of chocolate and vanilla as are standard, but the Birthday Bourbon barrels add a berry component that adds an additional depth of flavor we don’t see in the Original. Because of the increased bourbon presence, you’ll get more oak and spice which play off of the berry and other sweet flavors so well.

Even after we went through the entire lineup, I found myself going back to Birthday for another four-ounce pour.

It’s almost as if a few years ago Bourbon County and coffee got into a big fight and stopped talking to one another. But this year, Brewmaster Keith Gabbett got the two into a room and they were able to work out their differences. Because of that, we have a coffee-forward Bourbon County Stout that has been missing in the lineup for the last few years.

The last true coffee variant was in 2017, and while the brewery tried Coffee Barleywine in 2018, and Café de Olla in 2019, nothing really compared. Technically in 2020 there is no branded coffee variant, but Special #4 could have very well been called Bourbon County Coffee and you wouldn’t have heard me complain.

Special #4 starts out being slightly different than the rest of the lineup because it’s an Oatmeal Stout which adds a bit more body and creaminess to the beer. The aroma upon opening is strong coffee, which comes from the single-origin coffee beans the brewery gets from Intelligentsia Coffee. There’s also maple syrup from Bissell Maple Farm located in Ohio which adds a slight sweetness.

What I loved about this beer is that it’s a coffee beer with a late maple syrup sweetness that doesn’t overpower the taste. It’s become much more common to see breweries load up a Stout with syrup so much to the point that you think you’re just drinking a bottle of the sweet stuff.

Like we saw with Revolution’s Maple Deth, Special #4 does a great job of keeping everything in the appropriate quantities. The maple syrup is noticeable, provides a really nice sweet backbone to the beer — but make no mistake, this is a Coffee Stout.

If we can’t have Bourbon County Coffee Stout, this is the next best thing. The expectations for 2021 coffee are already sky-high…sorry Goose.

In our tasting, the first few beers went Original, Birthday and then Anniversary. When I had my first sip of Anniversary, my palate hadn’t reset yet and Anniversary didn’t have the flavors pop as I had hoped.

After we opened up Caramella, I went back to Anniversary as I had a chance to break up that Original variant flavor with a Wheatwine; Anniversary had become a completely different beer and one that I absolutely enjoyed.

Aged for two years in Weller 12 barrels, like Birthday Bourbon County, this one is for bourbon lovers. But instead of fruity and sweet notes like those in Birthday, Anniversary packs more barrel. You’ll get strong notes of chocolate, dark fruit and oak with a lingering flavor of vanilla that’s there but very faint.

Again, with Birthday, Anniversary and Original all being the same beer but with different barrels, it’s really interesting to see how the cooperage changes the beer. The flavors you get in Birthday and Anniversary are so different yet it’s the same beer.

It feels criminal to put this as my fourth rated beer, but as I said earlier, beers one through four can be interchangeable. The fact is Original has to be a great beer this year because it’s the base beer for Birthday and Anniversary. As a bourbon geek, I ranked those higher just because I liked the flavors the unique barrels gave the beer.

Make no mistake though, Original Bourbon County this year is excellent. It’s more bourbon-forward than in years past, but still packs the cocoa and fudge notes that have made it famous for over two decades. The oak and tobacco notes from the barrel in Original are also more present than in previous years. I remember 2019 being good but really chocolate-forward and I think in 2020 Goose allowed the barrel to do more of the talking and that’s present in the three beers that really depend on the barrel to drive the beer.

You can pretty much get Original year-round now in Chicago and that’s a good thing should you want to have a nice big Stout come February.

The taste translates into much of the same with the saltiness of the pistachios and the sweetness of the cherries playing off one another very well. There are natural vanilla flavors with the oak of the barrel, but those don’t play a huge role in the beer.

I really like the flavor profile Goose got out of this year’s Prop., but with that many sweet ingredients, it does tend to make the overall beer pretty sweet. Prop. is going to be an excellent sharing bottle early on, as I could do about four to six ounces and be perfectly happy.

But if you want to hold onto your Prop., this is one to watch over time. As the flavors dissipate, I have a feeling this beer might actually get better as the sweetness subdues just a bit.

It seems Goose has completely bought-in on Wheatwine, as for the third year we get a version of the style. But 2020 is very different than in in previous years. This year, the brewery goes heavy on the adjuncts in Wheatwine, as caramel and cinnamon dominate the aroma and tasting notes.

The sweetest variant by far, the caramel apple take the brewery was going for was achieved, and if you like that flavor profile then you’re going to be a fan of Caramella this year. I actually think people who didn’t like the 2019 Wheatwine will be fans of 2020.

It’s slightly too sweet for me but I’ll be curious to see the reactions as people start to try it.

The award for most aromatic variant this year goes to Kentucky Fog without a doubt.

The variant with Earl Grey tea, Black tea, and honey isn’t shy in letting you know what you’re about to try when you open the beer up. Huge notes of tea hit your nose, in fact after we were done with the beer the Goose crew recommended moving that bottle and taster off to the side so the aroma wouldn’t interfere with the rest of the tasting.

Whether you like the flavors or not, Kentucky Fog hits the exact tasting notes that the Goose Island brewers said they were going for on the Zoom call. But the flavors of black licorice, pepper, and spice simply aren’t what I like in a beer.

You get the Earl Grey tea right away with a little sweetness from the honey but the black licorice flavors are the predominant notes in this beer and I’ve never been a fan of that candy. On road trips as a kid, my mom would bring it in the car and it would smell throughout the entire vehicle and I’d need to open my window. Maybe this one brought a little bit of that memory back, but either way, I drank a couple of ounces and I was good.

All-in-all a very strong year for Bourbon County, which has been one of the most scrutinized series of barrel-aged beers out there. I thought Goose did a great job with the barrel-forward variants, and when it came to the adjunct variants, the ones that missed for me were because of my flavor preferences more than anything.

In fact, I liked this year’s lineup so much I did something I haven’t done in a long time, I entered the Binny’s raffle to try and win the opportunity to purchase the entire lineup.