They say nostalgia is a hell of a drug, and it certainly brought a shockwave along with it when compiling this list. From movies and songs to world events, the year 2000 did not skimp on the excitement. Get out your party hats and year-shaped goggles while we take a trip down memory lane and hand out some beers to six moments from 2000 now old enough to drink:

Paired with: Magnify Brewing Co. | Are You Not Entertained Sour Ale

In perhaps the most notable line of cinematography from 2000, Russell Crowe asked the question that we want to know so far, too, “Are you not entertained?!” Gladiator captivated audiences through the violent use of sword fighting and brutality while Crowe gracefully glides around the Coliseum as foe after foe falls at the end of his blade. Magnify Brewing’s Are You Not Entertained Fruited Sour shows how fun craft beer can be as the end result is an 11% ABV sour conditioned on a whole orchard of fruits and vanilla beans.
Honorable movie mentions: How the Grinch Stole Christmas, Castaway and Mission: Impossible 2

One of the more recognizable songs from the year 2000 was largely due to it’s repeatable chorus and fun lyrics. The band was Outkast, and the song was no other than “Ms. Jackson.” I’m sorry because this will likely get stuck in your head, and I am for real. One beer that hopefully won’t make you cry, though, is Gunner’s Daughter from Mast Landing Brewing Company. Gunner’s Daughter has a mild ABV and tons of chocolatey notes with an aromatic aroma of coffee similar to your morning cup. Mast Landing has released some variants of this one that are awesome, too, but the base version shines all on its lonesome.
Honorable song mentions: It’s Gonna Be Me NSYNC, The Real Slim Shady Eminem and Who Let the Dogs Out Baha Men.

The video game industry shares some similarities with the craft beer industry. Mainly that there has never been a better time to be a hobbyist of either. Thinking back on some of the classics (I’m fully aware that video games have been around before the Playstation), though, led to one game skating its way through all the memories. Tony Hawk’s Pro Skater 2 fueled the early video games as we kickflipped through the Hangar and hit the first 900 on a halfpipe to finish a run and shatter the scoreboard. Also, play it now remastered! Resident Culture Brewing, out of Charlotte, NC, embodied the memories of grinding around to collect S-K-A-T-E with their Free Skate NEIPA.
Honorable video game mentions: Diablo II, The Legend of Zelda: Majora’s Mask and The Sims.

Off Color Brewing | Beer for Golf

If 2020 taught us anything -even if it’s insignificant- is that Sports can give us some bright and uplifting moments. Tiger Woods, in the beginning stages of constantly being on the prowl for a weekend win, put the golf world on notice in 2000. He completed the career grand slam via his win at The Open Championship, just three years after his first major victory. The beer pairing for this entry should come as no surprise. Off Color Brewing’s Beer for Golf. The wit-style ale makes for a refreshing sip that is perfect on the front nine or back nine, or anywhere in between.

It’s no exaggeration to say that we would not be here today without technology. It has become crucial to our lives -hello likely mobile reader. Technology is ever present in our society, and today’s kids know no different. Our lives are easier and more complicated because of technology, sure, but in 2000 people were actively worried during the Y2K Phenomenon. Planes were going to fail, computers were supposed to take over, yada yada you know the deal. Luckily, the machines haven’t risen yet. Halfway Crooks’ B.S.O.D. (Blue Screen of Death) IPA is that perfect reminder that technology can go wrong. Next time it does and you’re frustrated, just pop a B.S.O.D. and relax. The mosaic hop aroma is going to hug you and then the flavors will wow you.

Bush vs. Gore Presidential Election of 2000

from George Bush GIFs via Gfycat

Until recently there was always one controversial presidential election that came to mind. Well, most peoples’ minds. Some of us history nerds could dive into some older elections, but I digress. The Bush vs. Gore presidential race raised questions of authenticity and fairness. It challenged standings laws and became the precedent for new ones. Ultimately, it ended but never really went away. The last beer to pair with this list is an incidental collaboration. Nearly every year breweries across the nation produce some form of an “I Voted” or a “Go Vote” beer. Any style that happened to be in a fermenter with some basic labels or extra hops that were laying around. For this, if we have to name one it would be Jester King Brewing’s I Voted Today, but as mentioned, the important aspect of this accidental collab is to participate. 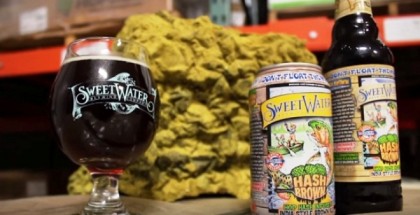