After the events of this week’s election, there is a lot of uncertainty. To some this is the beginning of the end, and to others it’s a new renaissance for the United States.

The Star Trek universe predicts that poverty will become so bad by 2020 that Sanctuary Districts will be opened, in which the poor, unemployed and mentally ill will be locked away for their own protection. Poor conditions in the Sanctuary Districts will lead to riots in 2024, and World War 3 will begin in 2026 (causing the deaths of over 600 million people). Good thing that is a completely implausible work of fiction! Now, lock the door to your fallout shelter, pry open a can of rations, and enjoy this episode of The Weekly Buzz.

Without further ado… comin' atcha throughout the Mid-Atlantic beginning next week! #offcentered pic.twitter.com/F4tx5r2I9P

Craft breweries continue to make this world a better place!

Help us raise funds urgently needed by @StrayRescue for the distemper crisis this Sun 11/6 at #ucbcGrove from 1-4PM! https://t.co/pO0UuOYjAR pic.twitter.com/7Zs6X7PNtc

Was there an epic sports-ball contest? I thought I heard something about it…

Craft beer for breakfast in San Diego sounds way better than what I was doing!

Bigfoot got a little older and wiser!

So, we aged Bigfoot in whiskey barrels with ginger & the beer is rolling out nationally today! This is a limited release & it's delicious! pic.twitter.com/Wh3Zvxdtrn

Some interesting news from the man himself!

Be on the lookout for this new Sour Brown Ale with peaches!

Beer Release Alert: Mischievous II & Black Tulip are now on tap & for sale at our pubs. Now shipping to all markets where our beer is sold. pic.twitter.com/bXell9z3mh

This new packaging gives me a little hope.

Our #President Dave Wilson checking out our new #BrewFree! or Die #IPA six pack on the right. What do you think? pic.twitter.com/wMnw3XSvs6

Do you know how many barrels of craft beer are brewed in your state?

How much #beer do the craft brewers in your state produce? – https://t.co/p6eCDjTtqL

Just walk up to those hops and give them a rub!

When selecting hops, it’s essential to give them a good rub before smelling—it really opens up the aroma! These will go into Interlude. pic.twitter.com/b07Hgj07S4

I think this would cause a whole new problem on dance floors everywhere.

Yay! Another ray of sunshine created by a brewery doing some good!

Self driving beer delivery – so much for Clydesdales. https://t.co/h08Okfr92X

I’m so glad this photo had a caption…

Cleanliness is next to godliness.

If you’re already excited for Christmas, here’s an event for you!

The El Segundo Christmas parade is on Sunday December 11th. We will open early for the festivities. Stay tuned! pic.twitter.com/wRPzgpG3iD

Do I know anyone in Kansas City? Someone send me a bottle!

High five to all of our friends who joined us at #ucbcGrove to help us raise funds for the @StrayRescue distemper crisis! pic.twitter.com/Aem6EtdDOc

Something new for those leaf-peeping hikes!

The exact moment she lost the election…

Sure, keep him away from the nuclear codes…but keep her the hell away from the taps. #ElectionFinalThoughts pic.twitter.com/C8lGVLi4af

Microbiologists, we salute you!

What’s in the bottle this year?

Chapter 10 of the #GritAndGrain series- learn about the ingredients and story behind this year's Proprietor's Bourbon County Stout. pic.twitter.com/VI5iCsfokY

I bet it has a high approval rating!

Coming off the line now @NightShiftBeer! It is tasting great. Go vote and then come down for some DIPA #Election2016 #XLV pic.twitter.com/IWwSM96Qsj

A new twist on an old favorite!

BERRY MONKS …. rolling out next week but on draft & for sale in The Tap Room THIS WEEKEND! #easton pic.twitter.com/qO9lyvDRau

Beer spillage is a deal-breaker.

I have a tall, gangly, annoying employee for sale…cheap. Full disclosure, she might spill beer all over you at work. #greatdrivehome 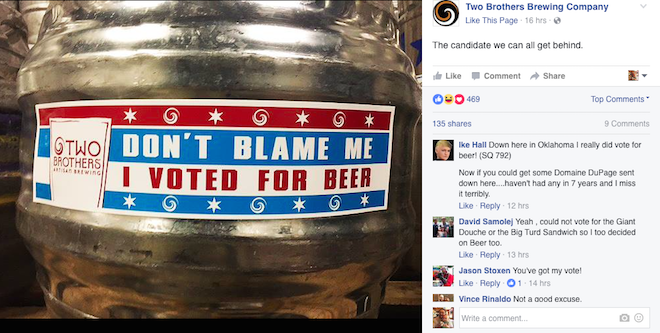 Drink good beer AND raise money for a library?! Sounds like a great idea!

Tickets on sale at both libraries for our 4th Fermented Fundraiser. Get them while supplies last! Thank you to @JacksAbby for your support. pic.twitter.com/I5D4ZMSB3l

What we all need to do right now…

More happy dogs because we all need a morale boost…

Trump wasn’t the only new leader we got this week!