The Marigold Strong Ale from Cervecería Cruz Blanca, a Chef Rick Bayless restaurant, is a dry, very fresh tasting beer. One thing of note was that it’s also unexpectedly drinkable and lacked any alcohol taste, which was shocking after I learned that the ABV was nearly 9 percent! It had a bubbly mouthfeel, which was very pronounced. It was similar to that of a sparkling wine. When the bubbles reach your nose, they release a fruity fragrance of blackberries and a hint of apple. I could have easily gulped down two glasses without trying, but it is sneakily strong.

The blackberry and coffee flavors were equally balanced and played games with my taste buds. I tasted the tart fruit first, but the rich coffee after taste was as fresh as a brewed cup of coffee. My second sip flipped to tasting bitter coffee but ended with the tart taste of the fruit. I expected to get used to one or the other flavor, but I continued to pick up of those notes with each sip. One of the reasons the beer is balanced is because of the Magnus Hops used to brew this beer.

When the glass is served, the color of Marigold Strong Ale was reminiscent of a fruit juice. The head created a light pink, frothy foam. The coloring itself was unexpected because the coffee flavor was so pronounced. I expected a dark beer but was treated to a pink ale. The slight murkiness added to its character.

Cruz Blanca offers 11-12 European-style-Mexican-inspired beers at a time, depending on the season and what is not tapped out. All of the beers seemed familiar, yet exotic. The Marigold Strong Ale is a happy medium.

The bar faces the wood shelving and sits in front of wide windows to the brewing operation. The bar is so small that it only seats about 8 to 10 people tightly at the counter. The shelves are covered with the Cruz Blanca growlers, glasses, and beakers… Yes, I said beakers like you used in high school chemistry. It’s cute, if not a little odd. It’s a great place to eat, but one would truly go there for the beer. 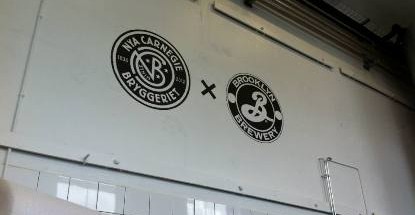